Merry Christmas to you, and Happy hollidays to thoes of you who are into other dieties. This is the time of year selected by the masses to be happy and joyous, so please do so in the the best way you see possible.
Posted by Zartok-35 at 2:31 PM 1 comment:

I finally saw the CP Holiday train! It's an elusive bastard on an elusive railroad; in my case, anyway. I have tried many times without success. There was a big fiasco back in 2007 that resulted in me and Dad going to Elstow. I heard from my friend Roman that the Holiday Train arrives several hours earlier than I thought, so I talked my Aunt Marlene into making a harty detour past the train yards at Sutherland on the way to school this morning. We found him out by the Washing facility on Grey Avenue, and I took some pictures. I know, some of them are pretty shitty, but it was -30 out. 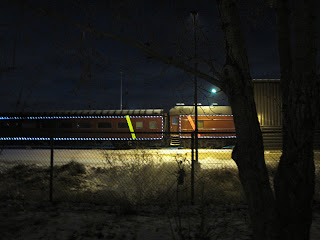 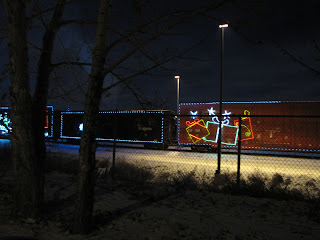 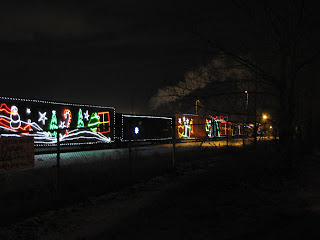 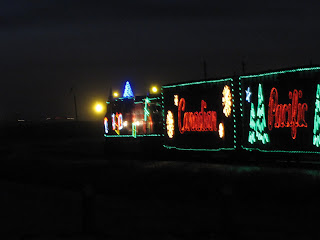 Someone had their trailer moved. I'll bet they're here to see the Holiday Train too! 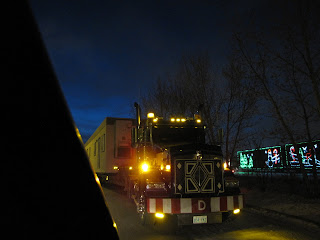 The train-themed festivities were not scheduled until 11 o' clock. Seeing as this is Tuesday, it's incredibly stupid, as everyone will be at work, or at school, like me. I immagine the collective that was there today was very small, and consisted of housewives, old people, a couple basement dwellers, and possibly some livestock. I think it's a shame, I like Wide Mouth Mason.

Thanks for checking in, and keep your eyes open. The train is still going west!
Posted by Zartok-35 at 3:36 PM No comments:

Leave it to me to forget my own Birthday!

Actually, I've just been really busy to post about it. For those of you who bother to come around here and read this thing, I was born two days and seventeen years ago, December second, 1992. And I'm proud of it!
Now I'm old enough to play "Conker's Bad Fur Day" I remember hearing News stories about it back when it came out. I'll have to fetch it, and fire up the old N64.

I haven't seen enough trains latley, but the Sasakathewan weather hasn't been perfect since last Saturday.

Labels: not much to say

Hello, Everyone. I am Elijah Hall, an autistic teenager from Saskatchewan. I will use this blog to post what ever the hell I feel like posting, I guess. Expect comic strips, train pictures, drawings, and other strange and twsited shit that I desire.
Posted by Zartok-35 at 6:14 PM 1 comment:

Zartok-35
Saskatoon, Canada
I'm large, I have aspergers syndrome, and I know a fair bit of stuff. I have no life, so I spend most of my time looking at stuff on the internet. Sometimes I draw things.